HEETS Tobacco Sticks for IQOS Review of All Flavors

One can only guess why Phillip Morris management decided to abandon the use of the Parliament brand in the IQOS product line. Now you can buy from an official representative only HEETS Dubai sticks, branded as if specifically for IQOS. Of course, they will assure that HEETS is Parliament. Maybe this will convince a beginner, but as an experienced IQOS user, I can tell you that it is not. The difference is enormous, and not only in taste, but also in the details of the design of the stick itself.

Tastes of HEETS Sticks for IQOS

As we remember, the Parliament had only two tastes. The Marlboro sticks had too many flavors, as many as six. HEETS are now not far behind! In the fall of 2018, they released two more new flavors. Let's consider them in more detail.

We start our review with the strongest sticks. HEETS Amber has the richest tobacco flavor. By the way, the smell, as it seemed to me, is stronger from him than from other brands. Even tastes stronger than the standard Blue Parliament. Together with all its characteristics such as strength and taste, it can be recommended to those who are trying to start smoking IQOS after regular cigarettes. Because the lighter sticks seem too chemical at first.

Yellow HEETS are a lighter version of amber. When you ask Parliament in a store, propose it, saying it is as similar as possible. It is immediately clear that people either did not smoke what they sell, or they are trying to mislead you with some marketing tricks. Well, in general, smoking is not disgusting, for everyday use it will satisfy most smokers.

Menthol Turquoise HEETS. Menthol seemed to me bitter, and too strong, like Mint Marlboro. I did not like. Although the taste of tobacco is almost not felt, everything is clogged with mint. Well, and no strength, perhaps even less than in yellow.

Purple HEETS filled with berry aroma. It smells strong, mint and currant. The taste is balanced and pleasant. Not so mint, not strong in tobacco, a little too aromatic, but overall the best.

A novelty about which we have already written. Bronze IQOS sticks, with a bright chocolate taste and a soft cocoa aftertaste with dried fruits. Very similar to chocolate Capitan black. Lovers of tobaccos with a deep chocolate flavor will appreciate it positively. For me personally, this taste is reminiscent of my favorite pipe tobacco from WO Larssen. One feels that the sticks were made with high quality and conscientiously to surprise.

Great refreshing taste of HEETS Green Zing! The citrus is felt. Immediately sweetness and aftertaste with a slight sourness. Much like McBurren's sweet cigarette tobaccos, apparently a mixture of herbs and lime gives this result. In general, not for everyday smoking, but to diversify - quite. 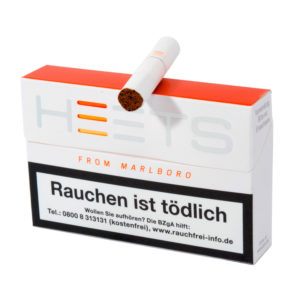 These, apparently, were some kind of test samples, because now they cannot be found on the market. Nothing to do with either Marlboro or Parliament HEET sticks.

The packaging design has become a match for the device itself. Laconic, without unnecessary elements and design solutions. I would even say that it is too modest (remember the Marlboro sticks), although the letters are now embossed.

As usual, there is no data on the content of nicotine. This is even starting to be a little alarming.

What Are the Sticks for IQOS Made of?

The modest design of the pack hides a very sophisticated stick.

In the new stick, the new steam cooling system is much more efficient. Now there is a biopolymer film in the filter. It is a food grade corn starch gel that is widely used in the food industry. Its task is to cool the steam during smoking, and to separate excess moisture. The manufacturer says that when heated, it does not emit substances hazardous to health.

Another novelty is a thin layer of foil between the paper and the tobacco leaf. Glycerin does not flow through it, and the heating in the stick lasts longer. This does not affect the quality, but the stick itself is really black after use.

Where to Buy HEETS Sticks

Today you can buy them everywhere. You can buy online with delivery in the official store in blocks. In IQOS spaces. You can go to an online tobacco shop. HEETS sticks are already on sale in large hypers in Dubai, on tobacco islands. The cost is affordable from 85 AED. If you take it in bulk it turns out even cheaper.

The variety of sticks is good, but it's not clear why not keep releasing Parliament. Remember that tobacco heaters are not harmless and the best way to reduce the risks is to quit smoking. Do not smoke!

What Are the Strongest IQOS Sticks?

The strongest stick is the Amber label. Suitable for those looking for the richest tobacco flavor. Feels almost like a real cigarette. I would not recommend smoking them indoors, it will feel like they were smoked inside.

The yellow sticks are the lightest and hardly noticeable. Even the taste of tobacco passes easily, or is drowned out by the mint chewing gum. Comfortable. You can easily buy it indoors, after airing the smell is almost gone.